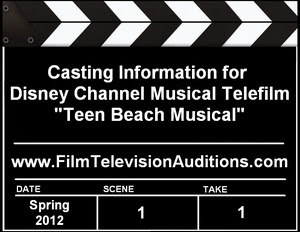 Disney Channel is taking the plunge into the teen beach party movie genre with this modern break into song and dance comedy in which surfer girl McKenzie and her boyfriend, Brady, literally go into a classic surf movie musical where it’s bikers versus surfers – and they’re in for trouble if they don’t back down. While they hatch a plan to get back home to present day, the duo try to blend in as everyone around them spontaneously breaks into song and dance. But when they interfere with the plot of the movie, their fate may be changed forever.

The writers of “Teen Beach Musical” are Vince Marcello & Mark Landry (“Zombie Prom”) and Robert Horn (“Sharpay’s Fabulous Adventure,” The Suite Life Movie”). Jeff Hornaday, who is a very talented and respected choreographer, will direct. Hornaday was set to direct the Disney Channel telefilm “High School Musical 4″, however that production never materialized. Hornaday was nominated for a Directors Guild of America DGA Award in 2011 for “Outstanding Directorial Achievement in Children’s Programs” for the Disney Channel Original Movie “Geek Charming”.

Chris Scott will choreograph (“Lemonade Mouth,” “Step Up 4,” “So You Think You Can Dance”. David Buelow (“Bring It On: Fight to the Finish”) serves as executive producer with Robert F. Phillips (“Teen Spirit,” “Valkyrie”) as producer. “Teen Beach Musical” is a production of Rainforest Productions, LLC and Envision Media Arts.

“Teen Beach Musical” begins on the last day of summer, and McKenzie’s (Maia Mitchell) surf and sand life is about to be upturned when she departs for boarding school to fulfill her family’s dream to graduate from the elite institution. But when she and Brady (Ross Lynch) find themselves literally transported into his favorite classic beach musical, set in the 1960s, about a rivalry between the surfers and bikers and a star-crossed teenage boy who likes a girl, he is ecstatic for endless summer while she is eager to get back home to keep her promise to her family about her schooling. While they hatch a plan to get back to present day, the duo try to blend in and understand 1960s teenagers, but it’s not so easy when everyone around them spontaneously breaks into song and dance. And when they accidentally interfere with the plot of the movie and the lead characters, surf guy Tanner (Garrett Clayton) and biker girl Lela (Grace Phipps), fall for them, instead of each other, Brady and McKenzie fear their fate may be changed forever.