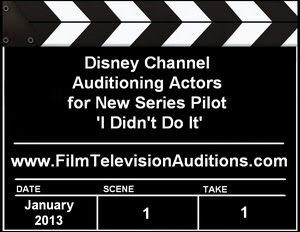 “I Didn’t Do It” will begin shooting early January, 2013 in Los Angeles.
AB Media Publishing, LLC

Note: This project has been pushed back to February, 2013.

Bandwagon Entertainment has been given a series pilot order by Disney Channel for a new sitcom titled “I Didn’t Do it”. Auditions are underway for the series regulars and possible recurring roles. Extras and stand-ins will be hired starting early January, 2013 when shooting begins in Los Angeles. There are many roles for actors to play high school students, especially needed will be extras who are 18 and over who can play younger. She 1/2 hour show centers around a pair of teen old fraternal twins and their dubious tales, with stories told in reverse menology.

“I Didn’t Do It” is about Claire and Cole Watson, who are fourteen year old fraternal twin high school freshmen. Claire has evolved from a scrawny sarcastic kid to a very attractive girl, and boys are taking notice. Her over-achieving best friend Jasmine helps her become comfortable with her new hot looks, and Claire sets her sights on a cute football player named Seth. Cole grew up in competition with is sister right out of the womb. Now that he is in high school, he wants to transform into a popular guy. The two siblings come up with a crazy idea to throw a party while their parents are out of town, however the night takes a few turns that they never could have expected.

Tod Himmel and Josh Silverstein wrote and are executive producing the show. Silverstein has written for the Disney Channel series “That’s So Raven” starring Raven-Symoné and Orlando Brown, and it’s spin-off series “Cory in the House” starring Kyle Massey and Jason Dolley; “So Random!” starring Tiffany Thornton and Sterling Knight, and it’s parent series “Sonny with a Chance” starring Demi Lovato. Tod Himmel has a long list of writing and producing credits that span two decades. His credits include “Sabrina, the Teenage Witch,” “Suddenly Susan,” “Everybody Loves Raymond,” “Hope & Faith,” and “90210”.

Claire and Cole Watson are fourteen year old fraternal twins who have just become high school freshmen. Claire wasn’t always pretty but now that she is, boys are taking notice – and she isn’t quite comfortable with that yet. Her friend Jasmine does help her become secure with her newfound hotness, and Claire sets her sights on football jock Seth. Cole grew up striving to equal is sister, and now that he is in high school, he decides that he can move into the popular category. The two siblings come up with a plan to throw a party while their parents are out of town, however things quickly become just a tad bit out of hand!