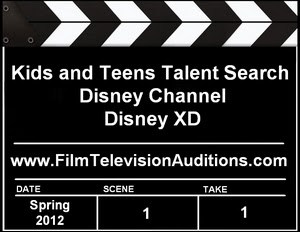 Disney Channel and Disney XD are searching for talent ages 9-18 years for possible upcoming projects. The casting directors are looking for male and female talent of any ethnicity and dialect. In addition to acting talent, they will be looking for those with strong singing, dancing, and athletic abilities of any type. They will consider all talent, both experienced and inexperienced with these particular skill sets. Also welcome are newcomers that have done Community Theatre, Acting workshops, etc. Videotaped auditions are also being accepted from talent who can not travel to the auditions.

Some of the Disney Channel and Disney XD shows and movies being currently or soon to be cast are “Bits & Pieces,” “A.N.T. Farm,” “Crash and Bernstein,” “Good Luck Charlie,” “Kickin’ It,” “Pair of Kings,” “The Little Leftover Witch,” as well as several shows currently on hiatus. Almost all Disney Channel television series are shot in Los Angeles, while many Disney Channel Original Movies are filmed at various locations around the country and in Canada.

This talent search is NOT to be confused with the Disney Channel open casting calls which they hold annually in various cities around the United States and world. For those open casting calls, dates and locations are released to the general public through the Official Disney Channel website and press releases. Talent can usually download a registration form ahead of time and then just show up at the casting call without an appointment. The lines are long any many many kids and teens are seen at the open casting calls. This current talent search is for those who submit a photo and resume ahead of time, and are called in to audition with a specific appointment time. Audition sides are made available through Sides Express and Showfax.

Submit headshots and resumes, along with a link to an online demo audition (if available) to the following casting director:

Ms. Kent will be seeing talent in person in Phoenix, Arizona by appointment only on May 8th through May 11th, 2012. Callbacks will take place on May 12th, 2012.

Rody Kent has many years of experience with the film industry where she has coached actors vying with hundreds of others for a single part, and she assists Presentation and Interview clients in much the same way. With her keen eye, Rody understands how to help clients quickly achieve their goals through developing a strong executive presence and confident presentation skills.

Rody has earned a number of distinctions during her career as a Casting Director. She has received the Women In Film Achievement Award, the North Dallas Chamber of Commerce Award for Excellence, and a nomination for a Casting Society of America Artios Award. Rody has served on several film-related boards of directors.

Rody Kent is headquartered in Boulder, Colorado and works nationwide.