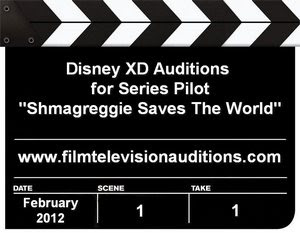 Disney XD and It’s a Laugh Productions are currently in production on the comedy sitcom pilot “Shmagreggie”. Disney casting directors are holding auditions for the show’s starring roles, which includes male and female teens between 13-15 to play fraternal twins. These are series regulars. Additional series regular roles are also being cast, as well as day players and extras.

Steve Leff is the executive producer for “Shmagreggie”. Leff’s previous credits include the ABC series “Teen Angel” and “Carpoolers,” “Two and a Half Men,” Nickelodeon Networks “Just for Kicks,” and the ABC Family show “Roommates”.

Here are the three starring roles being cast:

• Male, should look between 11 and 13 years of age. Any ethnicity. Wacky, chipper, and annoying type.

• Female, should look between 13 and 15 years of age. Any ethnicity. Is laid back and likes to break the rules and can be quite impulsive.

Follows a 13 year old boy named Shmagreggie who is blissfully ignorant of many things: his capacity to annoy, where he stands on the “looks” chart and how cool he is. He’s an eternal optimist, always looking at the bright side of things. He’s also a big inventor, and is constantly inventing things to “help” other students in his own oblivious way. Shmagreggie has two siblings, a twin sister named Meghan who is much more laid back than the uptight Max, and his brother Max – a kid who plays by the rules and has a tendency to get into trouble for over-thinking a situation.