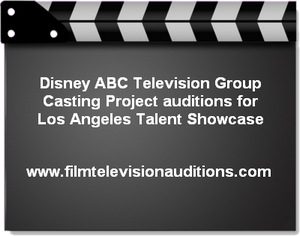 Disney ABC Television Group’s highly coveted Casting Project is accepting headshots and resumes for consideration to audition for the ABC Talent Showcase. Participants for each talent showcase must be at least 18 years old. Previous acting experience or training is required of all, but professional representation is not necessary.

The Casting Project identifies and develops culturally and ethnically diverse talent and actors with disabilities by having a talent showcase each year in Los Angeles. Selected participants perform one-act scenes for casting directors, talent agents, managers and other industry professionals. The actors chosen work with veteran directors for an intensive, three-week rehearsal process in preparation for the showcase.

The showcase features actors performing their one-act vignettes for invited casting directors, talent agents, managers and other industry professionals. Selected participants will be assigned a network executive from the Casting Department who will act as their mentor for one year. Additionally, participants will have access to various ABC and ABC Studios executives.

Various workshops also will be scheduled throughout the year for the actors to further hone their craft. As a direct result of the Casting Project, 90% of ABC Talent Showcase actors have either auditioned for, or were cast as, a series regular, recurring or guest role on primetime and/or daytime television, as well as being cast in film and commercial roles. What’s more, 60% have either met or signed with agents.

• ONLY Submit professional headshots and resumes.
• DO NOT submit any demo or audition videos.
• DO NOT submit your headshot and resume more than once.
• ABSOLUTELY NO PHONE CALLS are accepted.
• NO submissions will be accepted after JULY 1, 2011.
• You MUST have previous acting experience or training.
• You MUST be at least 18 years old to submit.

Send HARDCOPY headshot and resume only to the following address:

ABC will contact the selected actors to schedule an audition.

ABC has a long-standing commitment to promoting diversity in the entertainment industry through a variety of projects administered by its Talent Development and Casting departments. The Casting Project offers an excellent opportunity for talent that might otherwise go unnoticed.

Whether your sights are set on writing, directing, acting or production, Disney ABC Television Group’s Talent Development and Diversity programs play an integral part in launching successful careers in the entertainment industry. These programs are designed to attract, develop and staff individuals with diverse backgrounds and life experiences in either creative or production positions.

Those accepted into the talent development programs have the opportunity to hone their skills and perfect their craft under the supervision of network and studio executives, producers, writers and/or episodic directors.