You are at:Home»Disney Channel Auditions»Disney casting background performers for ‘The Wizards Return: Alex vs. Alex’

Casting had been completed on this project. 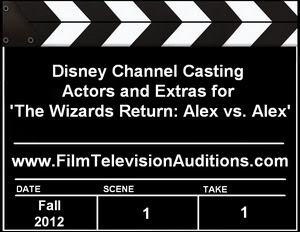 “The Wizards Return: Alex vs. Alex” is a one hour television event scheduled for premiere in early 2013.
AB Media Publishing, LLC

It’s a Laugh Productions is producing the upcoming hour-long Wizards of Waverly Place special for Disney Channel titled “The Wizards Return: Alex vs. Alex”. Background extras are currently being hired and will be cast throughout production. Shooting is taking place in Santa Clarita, CA. Disney Channel stated that after the huge ratings of the “Wizards” finale on January 6, 2012, it became obvious that fans of the show were not ready to say farewell to Selena or the rest of the cast. Therefore the cast agreed to reunite to bring their fans one last grand adventure!

“The Wizards Return: Alex vs. Alex” has the Russo family and friends traveling to Tuscany, Italy, to meet their long lost relatives. However when Alex attempts to prove she is more than an apparently easy-going young Wizard, she mistakenly conjures a spell that creates a Good Alex and an Evil Alex. When Evil Alex gets sucked into a handsome and alluring young male wizard’s malevolent plan to take over the world, Good Alex must discover a way to save her family and humankind, which leads to an epic battle between the two versions of herself high at the top of “Torre pendente di Pisa” – The Leaning Tower of Pisa.

Victor Gonzalez is directing “The Wizards Return: Alex vs. Alex” from a teleplay written by two-time Primetime Emmy Award winners Ben Montanio and Vince Cheung, along with long-time Disney Channel writer Daniel Berendsen. Gonzalez directed the majority of “Wizards of Waverly Place” episodes, and has also directed multiple episodes of the Disney Channel shows “Pair of Kings,” “Lab Rats,” “Kickin’ It,” and “A.N.T. Farm”. The creative team of Ben Montanio and Vince Cheung have written for such hit shows as “Married with Children,” “Wendy Wu: Homecoming Warrior,” “The Steve Harvey Show,” and “Ned’s Declassified School Survival Guide”. In addition to writing for many Disney Channel series, Daniel Berendsen wrote the Disney Channel movies “Hannah Montana: The Movie,” “Wizards of Waverly Place: The Movie,” “The Cheetah Girls: One World,” and Camp Rock 2: The Final Jam”.

Executive producing “The Wizards Return: Alex vs. Alex” is Selena Gomez, Vince Cheung and Ben Montanio, Dan Cross and David Hoge. Cross and Hoge are the creators, executive producers, and writers of the Disney XD series “Pair of Kings”. They also served as producers and writers on the Disney XD series “Aaron Stone”. “The Wizards Return: Alex vs. Alex” production company, It’s a Laugh Productions, is a an owned subsidiary of the Disney-ABC Television Group. The company has produced such Disney Channel shows as “Hannah Montana,” “The Suite Life of Zack and Cody,” “Jonas,” “Jessie,” “Shake It Up!”, “Austin & Ally,” and “Dog with a Blog,” among many others. Don Mink and Amy Rabins founded It’s a Laugh Productions in 2004. The duo have been partners in another company called Prep Shoot Post since 1988, a post-production accounting firm.

“The Wizards Return: Alex vs. Alex” takes the Russo family and friends to Tuscany, Italy, to meet their long lost relatives, but when Alex (Selena Gomez) tries to prove she’s more than a seemingly carefree young Wizard, she inadvertently conjures a spell that creates a Good Alex and an Evil Alex. When Evil Alex gets roped into a charming young wizards’ foreboding plan to take over the world, Good Alex must find a way to save her family and humankind, which leads to a monumental battle between the two versions of herself – all atop the Tower of Pisa.