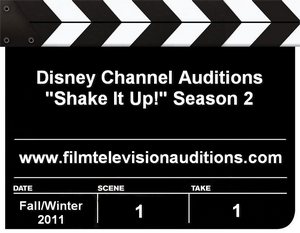 Note: Season 3 of “Shake It Up!” is now casting.
On September 29, 2011, Disney Channel announced it had increased Shake It Up’s second season order to 26 episodes.

Disney Channel has picked up the new female buddy comedy series Shake It Up! The pilot for this show was titled “Dance Dance Chicago” which was taped in January, 2010.

The production company is It’s a Laugh Productions, who brought you the Disney Channel hit shows Hannah Montana, Wizards of Waverly Place, Jonas, Sonny With a Chance, and the new series I’m in the Band. Comedy veteran Chris Thompson, creator of The Naked Truth, Action and Ladies Man and co-creator of Bosom Buddies, is writing and executive producing.

Production will start in July, 2010 and will begin airing on Disney Channel on November 7, 2010. Auditions and casting for dancers, guest stars, day players, and extras will be ongoing throughout the summer starting in mid-June.

Click Here to enter the “Shake It Up” Disney Channel Talent Search.

See the post titled Headshot and Resume Information regarding how to submit for auditions.

Please submit photos and resumes for Disney Auditions by mail only.
No phone calls or personal drop-offs.

Do NOT send photos and resumes to the production companies (they will most likely end up in the trash can), they do not cast the films. They hire casting directors who sort through the thousands of submissions and conduct the Disney auditions.

The comedy series introduces two high-spirited characters, best friends CeCe Jones and Raquel “Rocky” Blue, whose dreams of becoming professional dancers are realized when they become background dancers on the most popular teen dance show, “Shake it Up, Chicago,” a gig they land thanks to their longtime and well-connected friend, Deuce. Between learning a wide range of new dance styles, navigating the backstage antics at the show (especially with their rivals, Tinka and Gunther) and their newfound social status at school, the girls are on their way to new and fun adventures, some that will test their friendship.