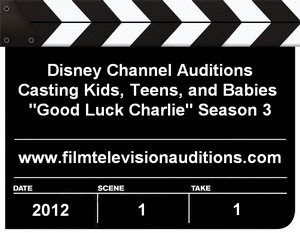 It’s a Laugh Productions and Disney Channel are back in production on the hit multi-camera teen sitcom “Good Luck Charlie” as it begins taping it’s 3rd season. New kids, teens, and infant twins are being cast as series regulars, recurring roles, and guest stars by the Disney Casting Team. The third season will feature an addition to the Duncan family, a new baby. There will be a talent search for infant twins to play the role of the new baby, as there was for the role of Charlie Duncan (casting directors were unsuccessful in finding an appropriate set of twins and decided to cast Mia Talerico).

Fans were able to choose the name of the new Duncan baby via voting on the show’s website. The prospective boy names were Noah, Jonah Toby, Bobby Jr. and Bo, while the possible girl names were Sydney, Erika, Mallory, Talia and Jenny. The baby will join toddler Charlie, sister Teddy, and brothers P.J. and Gabe during a special hour-long episode planned for spring 2012.

“Good Luck Charlie” originally premiered on April 4, 2010 to over 4,600,000 viewers, making it the highest-rated series premiere for a Disney Channel Original Series since “The Suite Life on Deck” in 2008. The Disney Channel Original Movie “Good Luck Charlie, It’s Christmas!” struck ratings gold on December 2nd as the most-watched live-action cable movie of 2011 with over 6,900,000 total viewer.

See the post titled Photo and Resume Information regarding how to submit for Disney acting roles.

Do NOT send photos and resumes to the production companies (they will most likely end up being thrown away), they do not cast the films. They hire Disney casting directors who sort through the thousands of submissions and they audition the actors.

The series follows two teenagers, Teddy (Bridgit Mendler) and PJ Duncan (Jason Dolley), and their 10-year-old brother, Gabe (Bradley Steven Perry), whose parents Bob (Eric Allan Kramer) and Amy Duncan (Leigh-Allyn Baker) enlist their help when they return to work after the birth of their fourth child, Charlotte “Charlie” Duncan (Mia Talerico). With their parents juggling full time careers, the older Duncan siblings pitch in, getting very familiar with baby formula, burp clothes and babysitting while navigating typical teen and pre-teen life. In each episode Teddy creates a personalized video diary for Charlie. Each video chronicles Teddy’s daily adventures and mishaps for Charlie to use as advice when her big sister is no longer living at home. The Duncan household prepares to expand with the impending arrival of a new baby, rubber duckies and choo-choo trains, while parents Bob and Amy juggle their jobs, and their kids, PJ, Teddy and Gabe, cope with both their teen years and their mischief-making toddler sister, Charlie.