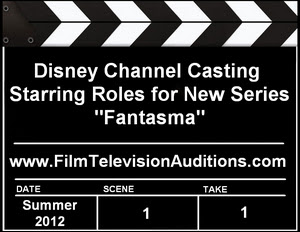 Auditions for the brand new Disney Channel half-hour comedy sitcom pilot “Fantasma” are now underway for the series regulars. Casting is taking place in Los Angeles, where the show will be videotaped. Both union and non-union extras will be hired when shooting begins in July, 2012. The storyline follows a family that moves into an old house, and they soon discover that there is a perky teenage girl already living there – and she just so happens to be a ghost!

“Fantasma” comes from the Primetime Emmy Award winning executive producing/writing team that brought you the hit teen sitcom fantasy “Wizards of Waverly Place”, which ran from October 12, 2007 to January 6, 2012 on Disney Channel. Vince Cheung and Ben Montanio formed their own production company, Rice & Beans Productions, in 1992 after meeting while working at ITC Productions. The dynamic duo have written and produced for “Growing Pains,” “Empty Nest,” “Married with Children”, and Nickelodeon’s “Ned’s Declassified School Survival Guide” among others. Their Disney Channel credits are “Wizards of Waverly Place” and the made-for-TV film “Wendy Wu: Homecoming Warrior” starring Brenda Song.

The two-time Casting Society of America Artios Award nominated team of Brett Greenstein and Collin Daniel have been contracted to cast the pilot episode of “Fantasma”. The two became partners in October 2004, and have cast numerous television pilots, series and films. A few of their credits include the TV shows and movies “Joey,” “Knight Rider,” “Melrose Place,” “Hot in Cleveland,” and “Most Likely to Succeed”. They have cast several ABC Family projects including “Just a Phase,” “Christmas Cupid,” “Princess,” “Happy Campers,” “10 Things I Hate About You,” and “12 Dates of Christmas”.

About the Montez family who moves into a very old house, and learns they have an unsuspected infestation, a perky 14 year old girl named Izzy who’s been a ghost for over a century.