You are at:Home»Disney Channel Auditions»Disney Channel international talent search for Shake It Up season 2 dance crews
*** This casting has expired *** 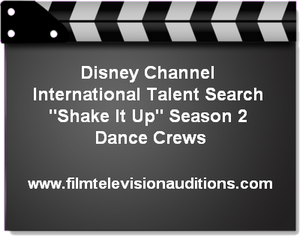 The cast on “Shake It Up” is very talented and includes Bella Thorne, who has the same agent that discovered Miley Cyrus, and won the role after several auditions and over 200 other hopefuls. Zendaya, whose name means “to give thanks” in Shona, plays the role of Raquel “Rocky” Blue, Houston native Davis Cleveland plays Flynn Jones, and Roshon Fegan plays Ty Blue.

Submit a video of your dance team performing. Please do not attach the video to your email, rather send a link to your video online at a site such as YouTube or Vimeo. Include your location and contact information for the dance crew to the following:

Put “Dance Crew Submission” in the subject line of your email.

Important Note: International performers should have a permanent resident card or an O1 VISA. You can obtain O1 VISA information in my 2011 Los Angeles Actors Resource Guide.

Disney Channel has announced that a “Shake It Up” movie is in the works, along with a “Lemonade Mouth” sequel. “Shake It Up” airs on Sundays at 8:30pm ET/PT.


Please submit photos and resumes by mail only.
No phone calls or personal drop-offs.

Shake It Up revolves around the adventures of best friends Rocky Blue (Zendaya Coleman) and CeCe Jones (Bella Thorne), who with the help of their longtime friend, Deuce Martinez (Adam Irigoyen), fulfill their favorite dreams of becoming professional dancers when they land roles as dancers on a local show, “Shake It Up, Chicago!”. Cece and Rocky deal with their circumstances, by adapting and maintaining their social status at school while watching CeCe’s little brother, Flynn (Davis Cleveland), and the antics of their TV show which includes their matching the skills of their competition, notably brother and sister, Gunther and Tinka (Kenton Duty and Caroline Sunshine).