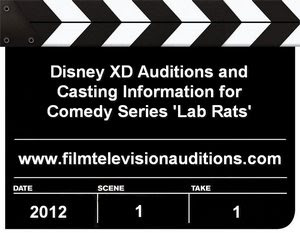 It’s a Laugh Productions and Primetime Emmy nominated producer Mark Brazill are in production a the multi-camera comedy series for Disney XD. The project was formerly titled “Billion Dollar Freshman,” but has been renamed “Lab Rats”. Disney Channel auditions and extras casting is ongoing throughout production on season one.

“Lab Rats” is about three siblings, built as bionic military operatives by the government, each have unique special skills. stars two-time Young Artist Award winner Billy Unger, who has been working steadily in films and television series since 2007, as Chase. Spencer Boldman the role of Adam. Boldman is a reletive newcomer who has had roles in the Disney Channel Original Movie “Jack and Janet Save the Planet”, and a recurring role on the Disney XD sitcom “I’m in the Band”. Kelli Berglund has been cast in the role of Bree. Kelli is a highly talented actor and ballet dancer who had a role in the 2006 Discovery Kids series “Hip Hop Harry”.

The creators of “Lab Rats” are Chris Peterson and Bryan Moore, both of who previously worked as assistants to writers on “Grace Under Fire”, and supervising producers on “That ’70s Show”. Producing is two-time Primetime Emmy Award nominee Mark Brazill, who has worked as producer on such shows as “3rd Rock from the Sun,” “That ’70s Show,” “Happy Hour,” and “Good Vibes”.

Do NOT send photos and resumes to the production companies, they will most likely end up being thrown away. Production companies hire casting directors who sort through the thousands of submissions and conduct the auditions.

Siblings Chase, Adam and Bree are high tech bionic clones who are part of a top secret development for the military. They each have unique special skills – Chase is the most intelligent, Adam has the most strength, and Bree is the quickest. Their creator, hi-tech inventor Donald Davenport, keeps them in a secret lab isolated from the world. But when the three end up sneaking off to spend a day at school, they realize there is more to life and begin to question their willingness to be nothing more than military weapons.