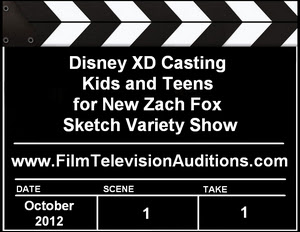 It’s a Laugh Productions has been given a series pilot order from Disney XD for a new sketch variety show starring Zach Fox. The YouTube sensation, who has a couple hundred thousand views on his official page, is known for his zany and outrageous video street interviews. In the series, Zach plays a wacky and neurotic host of a weekly student television broadcast at his K-12 school. Roles for kids of elementary school age through high school age are being cast by Disney casting for series regulars. Additional casting for supporting and day player roles will also be cast soon. The show’s extras will be cast throughout the shoot starting in early October, 2012.

Disney Channel approached Zach Fox after seeing his comical YouTube video interviews, and several of his web-series such as “Stoga Gone Wild,” “Limelight,” and “The CHeeSe”. Disney signed Fox to host the hidden camera prank series “Just Kidding” which will also air on Disney XD. According to Deadline Hollywood, the show will feature “everyday kids who pull off humorous pranks on unsuspecting adults”. In addition to hosting the show, Fox will pull off his own prank in each episode of the Canadian series, scheduled to premier this fall.

Producing this new Zach Fox series is the Disney Channel production company It’s a Laugh Productions, which has been behind some of the greatest Disney Channel hit series and movies including “Lizzie McGuire,” “High School Musical,” “Camp Rock,” “The Suite Life of Zack and Cody,” “Hannah Montana,” “Wizards of Waverly Place,” and countless others. Don Mink and Amy Rabins founded It’s a Laugh Productions in 2004. The duo have been partners in another company called Prep Shoot Post since 1988, a post-production accounting firm.

Executive producing the untitled “Zach Fox Show” is David Nickoll, who started out his career as a production manager on “Saturday Night Live”. He then worked as staff writer on “The Late Late Show with Craig Kilborn,” creative consultant and head writer on “The Late Late Show with Craig Ferguson”. Nickoll recently served as executive producer on the half-hour weekly satirical news-show “infoMania”, which put a humorous spin on different aspects of pop culture in the United States, including outrageous news stories, video games, viral videos, as well as movies and music.

High-school sophomore Zach Fox is an amiable, madcap student who hosts a show on the student run TV station. Zach and his best friend Sal, who is also his cameraman, are tolerated by the school’s principal due to the fact that his son gets to be on their show. Always striving for the attention of the school’s most beautiful and popular girl, Zac doesn’t hide his affection for her even though she is the girlfriend of the football team quarterback. And having a sassy little sister with a group of overly conceited friends who harass Zach, surely adds to his already hilarious lifestyle!