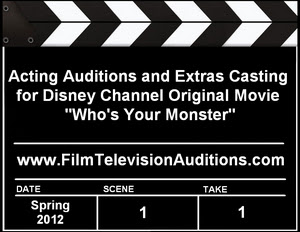 “Who’s Your Monster” is shooting in Vancouver, BC through mid-May, 2012.
AB Media Publishing, LLC.

Production has begin on a new Disney Channel Original Movie titled “Who’s Your Monster” and casting for supporting and day player roles continues. Extras will be cast throughout filming in Vancouver, BC. The movie is Halloween themed, and set to premiere during Disney Channel‘s second annual month-long Monstober event in October, 2012. Shooting will begin on March 26, 2012 and continue through mid-May, 2012. The movie is about a girl who discovers her parents are monster hunters when she accidentally releases them from a secret containment chamber. She and her trusty techno friends must recapture the escaped demons and save her mom and dad.

Starring in “Who’s Your Monster” is the multi-talented Olivia Holt, who plays the role of Kim on Disney XD’s hit teen sitcom “Kickin’ It”. 14 year-old Holt began acting as a toddler doing local theater productions in Nesbit, Mississippi where she grew up. She has appeared in several television commercials, including Hasbro, Mattel and Bratz dolls. Holt auditioned for Disney XD’s martial arts show Kickin’ It, which premiered in 2009. Having skills in gymnastics, she got the call back from producers and joined the cast in 2011.

Primetime Emmy Award nominee Stuart Gillard will direct “Who’s Your Monster” from a script written by Annie DeYoung, Ron McGee and Geoff Rodkey. Gillard is a Canadian film and television director who’s credits include “Charmed,” “One Tree Hill,” “90210 (2011-2012),” “Teenage Mutant Ninja Turtles III,” Walt Disney Pictures “RocketMan,” not to mention the Disney Channel Original Movies “Twitches,” “Twitches Too,” “Hatching Pete,” and Avalon High”. Stuart Gillard started as an actor and won the Canadian Film Award for best actor in 1975 for his performance as a journalist in the film “Why Rock the Boat?”.

Daytime Emmy Award winner Sheri Singer, owner of Just Singer Entertainment, will executive produce “Who’s Your Monster”. She formed her company with Steve White and it was called Singer/White in late 90’s, and then changed it’s name. It is known for producing many projects for Disney Channel such as “The Luck of the Irish,” “Double Teamed,” “Right on Track,” “Go Figure,” “Cow Belles,” “Read It and Weep,” “Hatching Pete,” “Good Luck Charlie, It’s Christmas!”, and all of the “Halloweentown” series.

A savvy teenager who discovers her family’s closely guarded secret – she’s a fifth generation monster hunter. But Skylar (Olivia Holt) doesn’t realize there is one immortal monster, Deimata, who wants to unravel her family’s secret. In order for Skylar and her friends to stop Deimata and her army of monsters, they’ll need to face their biggest fears and overcome them together.