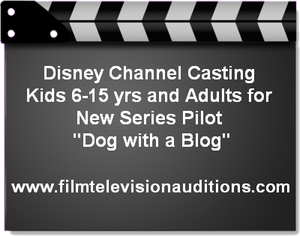 “Dog with a Blog” is being produced by It’s a Laugh Productions for Disney Channel.
AB Media Publishing, LLC

Disney Channel and It’s a Laugh Productions are moving forward with a new comedy series pilot episode titled “Dog with a Blog”. It is not known if this is a working title. The award winning casting director for the show is holding auditions in Los Angeles for series regulars, including several kids ages 6-8 yrs, 13-15, and middle aged adults.

The show centers around a family and their intelligent talking dog Stu, who the father rescued from a shelter. The father has a teenage son and young child daughter from a previous marriage, and the mother has a teenage daughter who is also from a previous relationship. The teens clash with vastly different personalities and interests, the younger daughter is smart but is somewhat overindulged and demanding. The kids end up forming a bond as they try to keep Stu’s abilities a family secret.

Aside from the series regulars, there will me many other roles including cheerleaders, nerdy types, teachers, and general background artists. Shooting on “Dog with a Blog” will begin November, 2011.

“Dog with a Blog” is under AFTRA contract. Actors please put your AFTRA membership number on your resume.

Note: Talent can join AFTRA online at www.aftra.org or at their local branch office.

Starring: To Be Cast

About a talking and blogging family pet. Centers on 15-year-old Tyler and Kayla, who have just become step-siblings but don’t get along because they’re very different: Tyler is popular, social and gets by on his looks, while Kayla is super smart, socially responsible and despises guys like Tyler. Cue Stu, the new family’s dog. He talks, blogs about his family on his social network, and, with his canine point of view, helps Tyler and Kayla navigate their new sibling status as well as the world of high school.