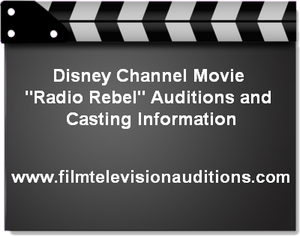 Production on the Disney Channel Original Movie “Radio Rebel” is set to begin in August, 2011 and casting for day players, extras and stand-ins will continue throughout filming. The movie is being shot in Vancouver, BC which has become a Disney Channel favorite location for many productions.

“Radio Rebel” stars the talented Debby Ryan, who has been groomed to follow in the footsteps of such Disney Channel stars as Miley Cyrus, Selena Gomez and Demi Lovato. Ryan recently finished shooting 13 episodes of her new Disney Channel show “Jessie”, and the studio liked what they saw so much that they ordered an additional 7 episodes. Ryan will shoot the new episodes after “Radio Rebel” wraps.

Peter Howitt will direct “Radio Rebel” from a screenplay that is based on the novel “Shrinking Violet” by author Danielle Joseph. This will be Howitt’s first Disney project, however he has directed a number of family oriented films. Goldering Productions’ Jane Goldenring is producing along with Kim Arnott and Oliver De Caigny

The following types are being cast:

Click Here for the extras casting process information for Canada.

High school senior Tara Adams (Debby Ryan) is so painfully shy that she dreads speaking to anyone in the hallways or getting called on in class. But in the privacy of her bedroom with her iPod in hand, she rocks out – doing mock broadcasts for Miami’s hottest FM radio station, which happens to be owned by her stepfather. When a slot opens up at The SLAM, Tara surprises herself by blossoming behind the mike into confident, DJ QT – and to everyone’s shock, she’s a hit! Even Gavin, the only guy in school who she dares to talk to, raves about the mysterious DJ’s awesome taste in music. But when The SLAM announces a songwriting contest – and a prom date with QT is the grand prize – QT’s dream could turn into Tara’s worst nightmare.